A Hail Mary attempt on my Classix II bass issue

In laymen's words, the baffle step correction (or compensation) addresses the fact that low frequencies are diminished up to 4 times, or with 6 dB, when a loudspeaker is placed in an open space. The perceived loss, also named diffraction loss, is caused by the loudspeaker baffle as it directs forward (in half space) only high frequencies having wavelengths comparable to the baffle width. 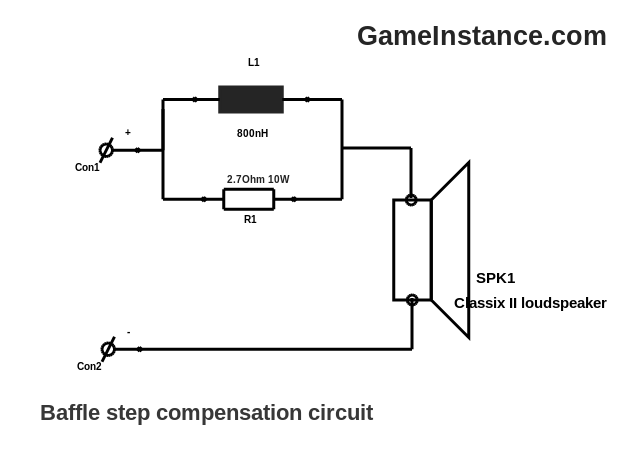 Among the frequent indoor loudspeaker arrangement scenarios are flushed against the wall and surrounded by books on a shelf. A 6 dB baffle step correction would be excessive in these cases. On the other hand, a rear-ported cabinet, such as my Classix II build, requiring a reasonable distance from the walls, creates a finite volume of room air that must be filled by omni-directional bass frequencies. This calls for a smaller, 2-3 dB attenuation.

I went for a 3dB correction and the effect is only slightly better. The sound is warmer still but the low bass frequencies are not greatly improved. That's obvious because the baffle width locks the f3 to 536 Hz. Moreover, the power loss must be compensated by the amplifier for the same overall sound pressure level.

I won't keep the attenuation filter on the speakers because to my perception they sound quite good the way they are. After all, Paul Carmody designed these speakers for indoor use and they must've been carefully tuned to cope with the inherent baffle effects. Now, I'm not praising his creation - because they still lack in bass - but the more I tinker with filtering, the more I appreciate the sound in their original formula.

Another funny thing I've been observing lately: the more I listen to them, the more I like them. They've broke-in, you'd say, but no! My hearing is rather adapting to them. The mid-woofers have been broken-in after being subjected to one watt of 10 Hz sine wave for several hours prior being mounted on the boxes. So, with a pinch of regret for not having more bass, I will keep them as they are - for now at least.