When your project involves multiple supplies with accurate voltage control, safe current limits or low ripple/noise and the use of left-over chargers or computer PSUs is impractical, it may then be the moment to consider acquiring your very first bench-top power supply. You'll soon find yourself overwhelmed with offers, options and details that would make any choice difficult. This article sheds light on important decision factors, purchasing nitty-gritties and the alternatives one may have.

Some of the aforementioned factors may not concern everyone. Be ready to discern and sort them by importance, then parse the specification of the selected units and rate each accordingly. The decision should be given by the importance-weighted average of ratings.

There are two types of power supplies in the wild: linear and switched-mode.

Linear PSUs rely on chunky grid frequency transformers to reduce the AC voltage by a predefined ratio. The low voltage AC is then rectified, filtered and passed through a linear regulator to obtain the set DC level.

They are the least eco-friendly solution, some may say, but have been around for decades with good results and reliable functioning - when not overexerted. Basically, the output voltage and current is controlled by active devices (transistors) that dissipate the excess energy given by the internal transformer. No trickery in that! Main inconveniences: heavy, bulky, limited in power by their heat sinking capabilities. Advantage: generate the cleanest output voltage. When designed properly and with safety features in place, they're rock solid.

Switched-mode on the other hand, rectify grid AC voltage and optionally filters it. The still high DC voltage is then switched on and off at a higher frequency through a lower-scale transformer to get low voltage AC - which has to be again rectified and filtered. The output regulation is achieved using a voltage surplus feedback that's transmitted to the switching modulation circuit - ideally in a galvanic isolated way.

Despite more complex circuitry, SMPS gained their popularity on the low conversion losses and the reduced size and weight. As always, there's a tradeoff: switching generates noise. Superimpose that with the inherent ripple and you get some sticky gremlins. This is the main reason SMPSs are unsuitable for precision applications - HiFi or medical. 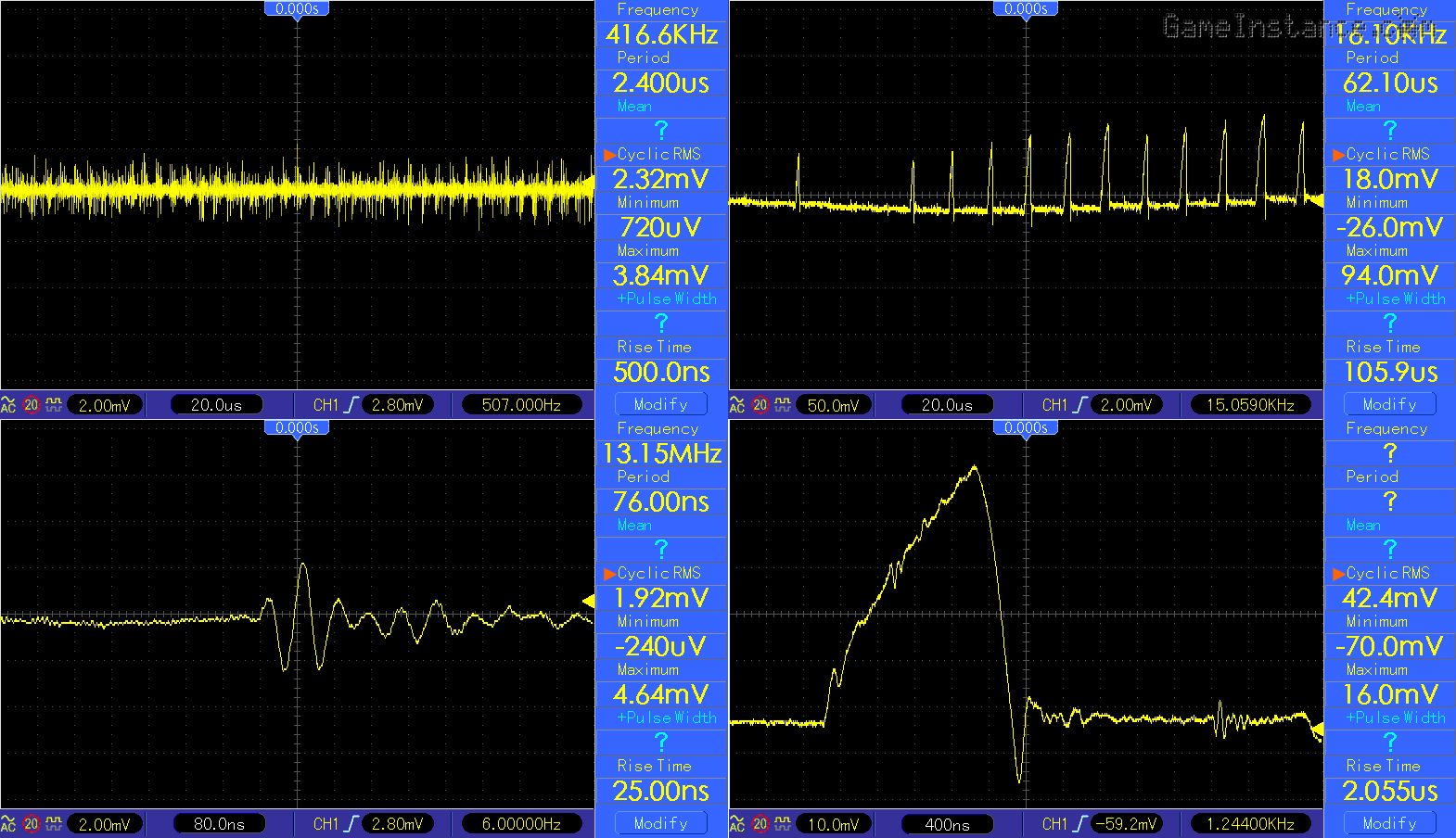 The graphs above show side-by-side the linear and SMPS generated outputs. The first has a mere 4 mVp-p ripple whilst the SMPS shows a 70-100 mVp-p combined ripple-noise. The 10+ MHz noise in the linear supply is likely caused by PLC signals escaping neighboring homes.

Choosing one of the two is simpler when there's prior knowledge on use cases. SMPS could charge batteries or power digital circuits seamlessly while occupying less space and being more efficient at it. If the envisioned applications are more generic or involve testing precision circuits, then a linear source would be a smarter choice. Although an electronic product should be robust to power supply variations, prototype development and testing phases may require stable and noiseless voltage.

Power (measured in VA) is an important consideration - the first decision factor for most. Remember that size, weight and obviously the cost are proportional with power for linear supplies. If you're not limited in desk space, you may be hitting that budget ceiling rather fast. Be aware that shipping heavy packages is expensive and depending on the reseller's country one may be eligible for import taxes and VAT. Switching-mode power supplies, on the other hand, are better alternatives as their cost and size is not strongly coupled with power output capabilities.

Multiple output channels is a desirable feature and the capable units usually offer an even number of equally high power channels and a lower power one. The former can be connected in series and/or parallel to achieve cumulative voltage/current targets while the low power one is used to feed logic and small signal control circuits. The supply's transformer must have at least one secondary winding for each output, a separate adjustable regulator and different monitoring circuit. That increases the complexity and the cost of the device.

Maximum voltage and current values are limited by the power capabilities. Charging 12 V or 24 V batteries, for instance, requires more current - at the expense of voltage. For higher impedance consumers, one would trade current for voltage.

Accuracy measures the maximum variation from the set values, voltage and current. Some manufacturers express it as a percentage of the set value, others as a constant value but the serious ones guarantee a combination of the two (ex. 0.05% + 10mV). Obviously, the smaller the values, the better is the accuracy.

Ripple is a periodic signal caused by the rise and descent of the voltage in the output low-pass LC filtering element. There are slight variations in their slopes as the pulse width is adjusted to achieve the configured output voltage given the load. Both linear and SMPS are affected by this phenomenon, especially when subjected to heavy loads.

Noise, in the case of SMPS, is an effect of switching in an imperfect circuit. The transition between on-off states, the inductance of the transformer's windings and the parasitic capacitance of diodes are a breading ground for oscillations. Their noise spectrum concentrates far above the switching frequency, into the MHz domain, making filtering rather difficult. Snubber circuits manage to dissipate or recover part of that energy but the rest ends-up at the output.

When turned on into a consumer load, the supply is expected to provide the set voltage without transients. That's generally not the case as most of the units exhibit such variations, commonly known as overshot or undershot. 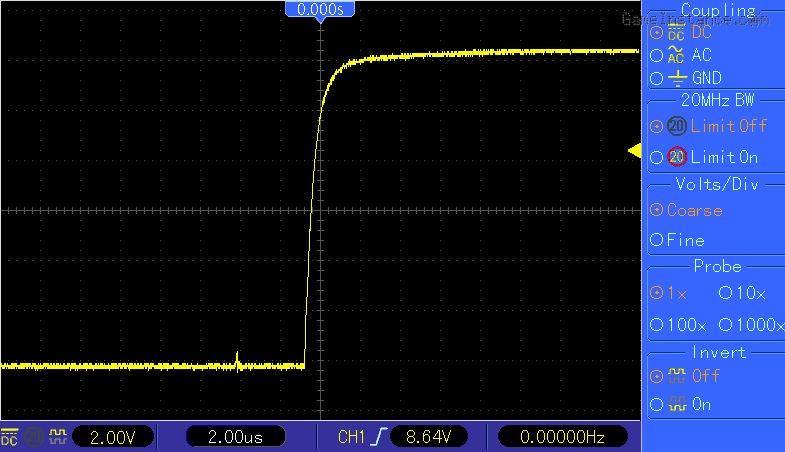 Power supply manifesting a turn-on undershot for ~10 us until settling to 12.3 V.

The overshot amplitude could have damaging effects on the powered circuit and ideally must be minimal. This is something rarely mentioned in datasheets but if the product has been on the market long enough, it will likely have reviews indicating it.

A well designed supply should withstand the maximum rated values for an unlimited duration and protect itself from extreme conditions. In such an event, the unit turns off until the cause is eliminated. In the said category it is worth mentioning short-circuits (SCP), over-voltage (OVP) and over-current (OCP) as the most important and units usually include protection for them. There's also the over-temperature protection in the form of bi-metal thermostat cut-off that's connected onto the heat-sinking elements. Other protections like over-power may exist but may come as an effect of other protections. Either way, protections are always welcome but note that some are more important than others. For reference, here's the list in their order of importance:

Analog instruments are among the simplest. They have one multi-turn pot for adjusting the voltage and optionally another for current while others have 2 potentiometers (rough and fine) for each setting. Some may have some extra (rotary) switches for selecting different secondary taps serving the target voltage. All have a voltmeter and optionally a ammeter indicator and here's a catch. The fact that indicators are digital doesn't mean the unit itself is, be aware of that.

Digital units have the same base regulation circuitry as the analog, except the control which is numeric. Essentially, the potentiometers are replaced by digital to analog converters. The benefit is obvious: precise control over values with direct feedback. Do note that analog PSUs have a direct feedback for the voltage too, but not for the current. To adjust the current, the operator must short-circuit the supply in order to create the low-drop circuit. This is weird and often dangerous.

I'll rephrase something mentioned before: analog power supplies can have digital displays as well. This can mislead the unadvised buyer. To make matters worse, resellers often advertise them as digital simply because they have 7-segment digital displays. As a thumb-rule: a unit may not be digital if it has no memory settings and no remote programming.

One could choose an analog power supply if current control is not needed or if the unit's construction limit is already at a decent value. There are some mods available for some popular PSUs that permit the adjustment of current without an external (short-)circuit. That would obviously involve hacking your newly purchased unit.

systems are slightly more expensive and the sellers will surely highlight the feature. A programmable PSU allows changing the voltage/current settings via a USART or USB connection port in the back-side of the case. The function is handy in various testing scenarios that would otherwise require the permanent attention of an operator. Think of it as an automated testing machine.

If other features are kind-of useful, the load switch is something to be considered as it permits turning off the output while changing the settings to avoid critical situations. Imagine accidentally turning the rotary dial one position further on the second voltage digit and instead of a reasonable 12 V, your prototype gets 22 V. That would be disastrous in most cases. One could argue that output cables could be disconnected between changes but pressing a button is far more convenient that hooking and unhooking bananas tens or hundreds of times.

Another useful function is the keypad (auto-)lock. Why? Well, imagine you've left the PSU charging a battery and a nosy creature - that shouldn't have been there in the first place and definitely not allowed touching that - starts turning knobs and pushing buttons on a high-voltage capable device connected to an explosive pack of chemicals. If you're shaking-off those chills, you're likely considering the locking feature.

The fact that a unit is digital serves no real palpable purpose if it doesn't have memory slots. If programmability is optional, the memory should come for free as a benefit of digital control circuitry. So, a digital power supply will offer 3, 4 or more memory slots - often in the form of buttons - which store voltage/current settings that can be recalled later.

As said before, the linear power supplies are by far the biggest and heaviest as they contain bulky and heavy transformers and heat sinks. The more powerful a unit, the heavier it is.

Switched-mode power supplies are lighter and smaller as they don't have to cope with high inefficiencies or low frequency transformers.

Older models come with the benefit of larger user-bases and better feedback information. Some older still have publicly available service manuals but, unfortunately, are no longer in production. Units that generally lack detailed or accurate specifications but have been around long enough will certainly have reviews. No matter the case, feedback provides invaluable insight on the reliability, component and build quality and should always be part of the selection process. Steer clear, however, from the "payed reviews" or those that seem to praise the features of a unit rather than judging it based on facts.

Most of the instruments are manufactured in Asia and tracked shipping costs are on par with the insured value, size and weight. Also, one must account for the fact that upon entry in your country, the package will be subject to customs verification and you'll very likely be eligible for import taxes and VAT. All these cost can amount up to 25-30% of the product's cost.

if any, is to be informed before buying anything. Of-course, there are cheap alternatives that get you going but they have - often hidden - limitations or will fail sooner than expected and then you'll find yourself in square one all over again. If you have higher expectations, be prepared to cash-out more because some of the featured units or brand names have 4-digit price tags.

What alternatives do you have? Well, you could build one yourself if the time and experience permits it. You'll learn more from it and spend a fraction of the cost. Internet abounds with resources and schematics of old but valid instruments and the exercise will do you nothing but good, again if you have the know-how and experience for such an endeavor.